“Tsumami Zaiku (Kanzashi)” is a traditional Japanese craft, recognized by the Tokyo Metropolitan Government – that has been handed down since the Edo period. Small, square-cut pieces of fabric (usually chirimen or cotton crepe raw fabric) is delicately pinched and folded with tweezers to make patterns of birds, or flowers with seasonal motifs.

The origins of the Tsumami Zaiku craft date back to 1785 when Sir Yasuteru (Kyoto state minister) made a kusudama hairpin (Kanzashi) using a piece of his wife’s old clothing.

Sir Yasuteru devised a technique of Tsumami Zaiku, made a Kusudama (hanging ball) which he presented to Emperor Gomomozono.

Then, the maids of the Imperial court (Miyanaka) who saw the Kusudama started to make Tsumami Zaiku. Eventually the Lady-in-waiting of the Imperial court (Miyanaka) and also the wife of the Japanese feudal lord (Daimyo) started to enjoy Tsumami Zaiku as a hobby. It was during this period that the technique of creating ‘Japanese accessories’ spread around Japan.

During the Meiji period (1868 to 1912), creating Tsumami Kanzashi became one of the most loved handicrafts amongst the public, and was used to decorate women’s hair.

Although the history of Tsumami Zaiku is more than 200 years old, there are unfortunately not many books that contain an accurate and correct history of the craft’s technique. This is most likely as the technique and skills were handed down between the master and the disciple.

Beautiful Tsumami Zaiku is still very popular and an indispensable item for traditional Japanese events – such as Shichigosan, coming-of-age ceremonies and weddings.

In recent years, the number of people who enjoy Japanese culture is increasing. This has led to an awareness and appreciation of “Tsumami Zaiku” – and this traditional Japanese craft is now a popular hobby. 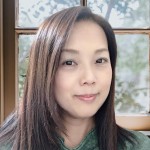 I am Sanae, a Tsumami Zaiku Artist based in Canberra, Australia. Tsumami Zaiku is a traditional Japanese handmade fabric floral art and I am creating my beautiful floral craft with multicolored fabric.

I love to share my stories of Tsumami Zaiku in my blog and also give you the tips for how to create beautiful floal craft.

I really hope you will enjoy my site and find special items for youself or for your loved ones.

The fabrics used for Tsumami Zaiku